Every journey starts with a map. Not for Chin State. The best-selling guide book “Lonely Planet” states that Chin State remained a question mark for travellers, and in “Le Routard”, Chin State is not even mentioned at all. It somehow looks like the journey to Western Myanmar ends with the bottleneck at the historic part of Bagan, where tourists are amazed by the multitude of golden pagodas.

There are different explanations for Chin’s white map: concerns about bad road conditions and difficult access to the remote Chin State are voiced across the country. The region remains the least developed in Myanmar. Furthermore, there are only a few hotels. In the past, tourist visits required both permission from the government and the presence of a local guide.

This was not the case anymore one month after Myanmar’s democratic election in November 2015, when my coffee exploration took me to Chin State. I found myself at the foot of Mt Victoria (Khaw Nu Sung), at 2,200 masl, in an idyllic setting and revealing an untamed wilderness. Blossoming rhododendron in red and white, little lime and orange trees and freshly harvested ginger offered a stunning scene. Among these exotic plants growing on virgin soil, wild coffee plants with coral red coffee cherries are living mostly in a sleepy existence in the shade of the old surrounding trees.

Both fascinated by these unknown wild coffee species, but hopeless in light of the prevalent poverty among coffee farmers, I decided to add something to that place which would have a long-term impact for the region and its people.

How Can Confidence in Coffee Growing Be Restored?

During my research last year, I was not aiming to fill a gap in the market, but looking for ways to revitalise the coffee sector. Coffee farmers told me about their double deception: in 1980, the National Government invested in a coffee program. Coffee was planted on a large scale, but because of unattractive market prices due to falling commodities in the late 1980s, farmers moved towards other crops. Later, in 2011, a American NGO called Myanmar Care, sought to improve the livelihood of rural communities through coffee cultivation. Unfortunately, the mission of the NGO failed to bring results, because farmers were left alone with their plants. Most of the coffee died or remained neglected until today. These two negative experiences obviously created a lack of confidence and indifference within the farmer community and weakened their relationship with coffee.

Today, a clear majority of coffee farmers claims to be ready to start afresh with coffee, having heard about the success stories of their peers in Mandalay or Shan State. They have now been convinced to work for profits. The fact that Chin coffee producers are no longer working individually, but for the first time in a cooperative setup, makes them more confident about their future.

Why There is Hope for Myanmar’s Young Coffee Generation

During the last “SCTA conference” – a prestigious high level meeting held in Geneva, where representatives from the coffee industry meet once a year – the lack of a successive coffee generation was mentioned as one of the biggest threats for the global coffee sector. Some countries like El Salvador are in a perilous state. Factors such as climate change, economic or political pressure prevent young Salvadorans from pursuing a life in coffee farming.

In Myanmar, the situation is different. The country has a significant, large youth population: about 55% are under the age of 30. This reality is also reflected in the Chin region, where I have seen an impressive number of young (coffee) producers. Whereas a huge part of Chin’s population emigrated to neighboring countries and Europe to seek a better life, there is a remaining young population that is assuming responsibility by taking up volunteer jobs in various Youth Organizations.

Despite many pushing factors such as climate change and the lack of employment, I found a committed Chin youth that wants to engage in the development of its region. Chins are particularly proud of their Chin identity, the roots of which go back to their ancestors from different tribes. Despite the British colonial influence and the late recognition of a granted state status, Chins were able to preserve their rich cultural heritage and local traditions. Today, the “stayers”, most of them supported by remittances flowing back from family members who lives abroad, are contributing to a living heritage. They are celebrating regional events, cultivating their ethnic languages through social channels and proud of their indigenous coffee. 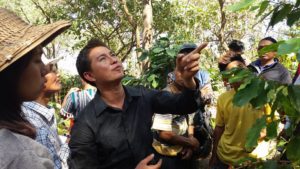 My aim was to connect with the Chin Youth and talk about prospects in coffee growing. During our second workshop (21-24 February 2017), we invited the Chin Youth Association to introduce themselves to our newly founded coffee cooperative. “Chin State has no mineral resources, such as oil or gas. We only have our forest, and heritage of our ancestors. Unfortunately, due to shifting-cultivation practices, the forest has drastically diminished in recent decades. We want to mitigate this phenomenon by cultivating coffee”, says Salai Mang Ghun, Head of the Chin Youth Association. Mar Hung, the Chair of the Youth Association, and member of  our cooperative Chin Lit added: “In contrast to other states in Myanmar, in Chin State we can work in peace. Although our state is poor, I don’t want to become a migrant worker. I calculated the income of a Chin migrant in Malaysia and a Chin person and I found that I can get the same amount of money. I like coffee and I will be a successful entrepreneur by doing business with our natural resources in Chin State, such as coffee and elephant foot yam.”